Twelve and a half year anniversary of Vocal Studio ROBB 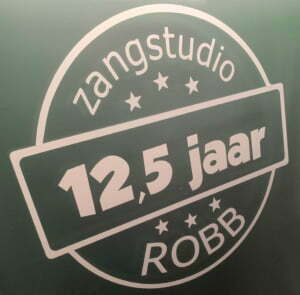 Twelve and a halve year anniversary of Vocal Studio ROBB

This time we want to reflect on the twelve and a half year anniversary of Vocal Studio ROBB. Last month, during the lockdown, we celebrated our 12.5 year anniversary in relative silence. We look back on very beautiful years.

Since the beginning in 2009, the Vocal Studio has grown into a full-fledged teaching location with separate waiting area and a free private parking. At that time we started with singing lessons, singing & guitar combo and songwriting lessons. Which has since then been expanded to several other teaching modules, including guitar for beginners, ear training and music theory. Vocal studio ROBB has continued to develop from the start and continues to do so. Especially on their core business: vocals and songwriting.

Since the beginning we have been associated with the NVZ, the Dutch Association of Vocal Teachers, where Rob also served on the board for several years. Furthermore we are also a member of the Guild of International Songwriters and The Songwriting Academy in the UK. In order to keep up with the latest developments in songwriting.

Over the years there has been a continuous influx of students. Fortunately also in COVID time. There are even students who have been taking lessons with us for 10 years!! In the twelve and half years we have been able to coach students of all age categories, from both the Netherlands and far beyond. Because since 2014 we also give online lessons. The energy that we get back from all students every lesson is what gives us an enormous drive. It’s a privilege to be able to do that. Music and singing makes a lot of sense in this one!

Over the years we have also given fun workshops at schools in secondary education, primary education and at  daycare centers. But also for various pop choirs, companies and private parties. In addition, we have organized masterclasses in songwriting and, among other things, the TVS singing method from the USA.

Since 2009 we have organized a concert every year, in which students can make music without obligation under the guidance of a band. Unfortunately since our 10th anniversary, due to the pandemic, we have no longer been able to have these moments. Hopefully this will happen in the spring this year. So that we can celebrate the 12.5 year anniversary of Zangstudio ROBB together, with all students. Because we also owe this 12.5 year anniversary to the trust of our (former) students, for which we thank you all very much!

So, cheers to a great year and many more to come!

Call me on Skype

Lessons during the corona crisis